POKEMON PARTY FOR MY 10 YEAR OLD My son asked for a pokemon party this year. Knowing nothing about pokemon, I saw from pinterest that the pokeball is a very easy theme for the party with abundant images for inspiration. I asked my son about the game and he gave me some ideas for activities at the party.

Invitation
The invitation was a pokeball made from taping a red semicircle onto a white circle with electrical tape. My daughter cut out the circles from colored paper cake plates.  We added a black circle in the center with a sharpie and colored a white circle on that with a chalk marker or white out. Inside my son glued printouts of the party details. Party Craft
The first activity was to create your very own pokemon out of clay. Each station consisted of a construction paper place mat with three containers holding a small amount of colored air dry clay and one container with a large amount of basic white air dry clay. Later, the children would receive large pokeballs to hold their creations. Here are some of the stations with drying creations: Party Decor
The decorations were simple. My husband spray painted the top half of six white paper lanterns red. Then we attached black electrical tape with a black circle at the white/red interface. We hung the lanterns, black and white crepe paper streamers, paper pennants and spirals. I purchased the Pokemon happy birthday banner from Party City and downloaded the Pokemon printable alphabet banner from halegrafx. I made pikachu shirts as favors from yellow t-shirts from Michaels ($2.50 each) and fabric paint but hung the shirts as decorations until the cake was being served. I also made pokeball candy dishes using black washi tape, black construction paper circles and a white paint marker that were filled with white and red jelly beans (vanilla bean and cherry, and cream soda and red apple). Pokemon Party Games
After washing their hands the children gathered to play some games. Each child was given a notebook and a pencil and my daughters gave out badges to children throughout the day for exhibiting various feats of courage. The badges were printed on card stock and attached to the notebooks with glue sticks that my daughters carried around all day. Then, my daughters took the children to the park to play the first games. While they were running off the energy stored up during the craft, the parents were handed bags of colored eggs and various sized pokeballs to hide around the yard. Each notebook already had a short list of items to gather from the yard on their pokeball hunt. We had evolution books for each type of pokemon to hand out as prizes. My son's collection of pokeball hunt rewards are on the left. Game 1. Pokeball Arena Battle: Children were sorted into team Ash, Team Rocket and Pokemon. Pokemon were in the center and the other teams tried to catch them through a game of dodge ball.

Game 2. Misty's Race: Children were sorted into teams of Sparo, Pikachu and trainers while my daughters were Misty and Ash. Misty rode her bike and Ash walked between the Sparo and Pikachu factions. This was a game of freeze tag. The trainers would get frozen by Sparos but Pikachus could unfreeze them and the teens ran interference.

Game 3. Pokeo: It was a fairly hot spring day, so the children took a break and tried a round of bingo at the park. The bingo game was from DLTK.

Game 4. Team Rocket Target Practice: We printed out pictures of team rocket and my daughter taped them to trees at the park where the kids used them for nerf weapon target practice. I was surprised to see many bows and arrows among the weapons of choice. I had pulled out my son's nerf pistols, but he also opted for a bow. This idea came from Jen at a Thousand Words ...

Game 5. Guess the Pokemon: I copied DLTK coloring pages of 12 pokemon and printed them out. Nine fit on a wall hanging in my dining room and the other three were against photo albums on the wall in the living room. My daughter traced them onto black construction paper to make silhouettes of various pokemon for the first part of the game. Each child was timed naming off all of the pokemon. The one who got the most correct in the shortest time, won. For the second part of the game we taped the original coloring page that was used for the silhouette onto the back of each child. Children had to guess the character by asking other children questions. The first one to figure out his character won. Game 6. Volt Orb Flip: My son told me about this game in pokemon where you multiply numbers sequentially until you get the volt orb. We adapted it for the party. Each child was given a large pokeball and when my daughter yelled flip, the children flipped over the ball to see the number inside. The numbers were 1 through 4. The children wrote their numbers on their pokedex pads. If a child had volt orb, he was out. The pokeballs were mixed up and redistributed and the game was repeated. The next number was multiplied to the first, the next to that product and so on until everyone ultimately got the volt orb. The child with the highest product won. Originally I planned to do this with the vault punch idea and a flap instead of a paper wrap, but my son thought it would be fun to use the balls while the clay was drying for something else. We ended up with a tie for first. The last child remaining didn't even win because his numbers had been mostly ones. We ended up giving out three prizes for that game.

Game 7. Pokeball Hunt: We told the children that the nursery had been robbed so in addition to pokeballs they had to find poke eggs. We had the children each find: two (2) ping pong ball pokeballs that we made with dollar store balls and red and black sharpies; three (3) smaller pokeballs that opened with see-through pokemon and stickers or tatoos inside; and, six eggs of one color determined by picking an egg out of a bag. Each egg had two pokemon inside. I got the pokemon figures on Amazon and the pokeballs at DHGate.


Game 8. Pokemon Rotation Battle: This game was actually played after the dinner and cake were served as part of the sleepover. This is a messy game and children were given the option of wearing a garbage bag or rain poncho. The picnic table was set with 12 aluminum pie tins. Each tin contained something messy: jelly, mustard, ketchup, spaghetti, mayo, etc., except one which contained a treat. The tins were covered with a sturdy paper plate with a duct tape handle. My daughter played pokemon theme music from her ipod while the children walked around the table until she turned off the music. each child was blindfolded and one hand was placed on the handle. They had to lift the lids and slap their other hands into the plate when my daughter yelled, "Catch em all!" This game proceeded until each child had a treat. The desserts were especially fun to prepare. We made pokeball red/white candy dipped oreos. We crafted red heart mint tins painted with white out and striped with sharpies to make pokeball hearts. I made a pokeball cake using fondant for my first time. We had black and white sugar cookies in honor of Pokemon Black and White. Various red and white candies in assorted jars set the scene nicely. We made pikachu pops out of peeps (Peepachew Pops) and Blowpop pokeball pops. Party Favors
The treat sacks were also pokeball themed made from white bags, red and black craft paper and black washi tape. Each sack contained a home-made mint tin, a peep-a-chew pop, a pokeball oreo, some official Pokemon gum, hard candy and stickers, an evolver book, a home-made pokeball bands bracelet that my son and I made without a loom, personalized poke cards my son and I had fun creating at My Poke Card, pokemon pencils and tatoos, pokemon magic erase boards, red, white and pink candied sunflower seeds, and pokemon blowouts. The pinata had pokemon rings as well as candy and silly bands. The guests also took home their pikachu shirts, pokeball hunt treasures, pokedex notepad with badges and clay creations. Guests who spent the night later played Nintendo games on the Wii. This was a really fun party and I enjoyed the preparations as much as the party itself. 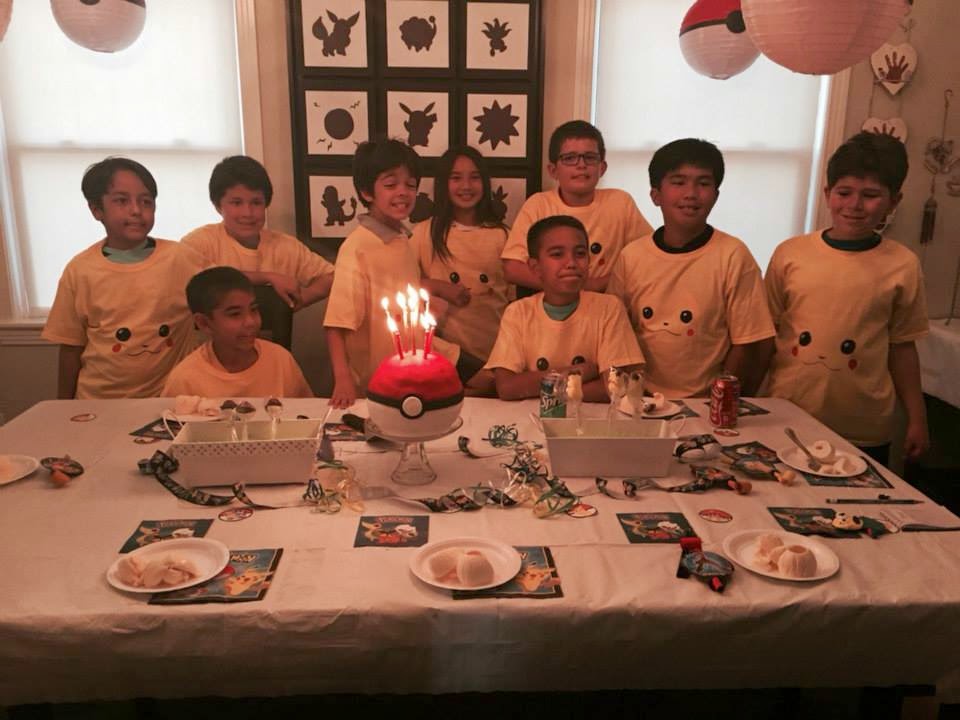 Here is a picture of my son with some of his guests getting ready to blow out the candles. A few candles were trick dynamite candles left over from the spy party. That was fun!

Most of these images are at my pinterest page. All the ideas came from those pins except for the games that my son suggested.  Thanks.